★ Book Review ★ THE GIRL IN THE GLASS by James Hayman

We're so excited to share our review of THE GIRL IN THE GLASS by James Hayman for TLC Book Tours! 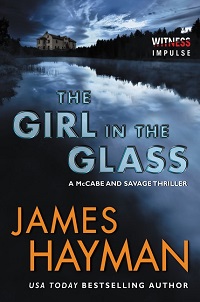 About THE GIRL IN THE GLASS

Aimée Garnier Whitby, a beautiful French artist and wife of one of Maine's richest and most powerful men, is found near death on the Whitby family's private summer island, the letter "A" mysteriously carved into her chest.

Veronica Aimée Whitby, the eighteen-year-old descendant and virtual double of the first Aimée, becomes the victim of a near perfect copycat murder. With another beautiful, promising young Whitby woman slain, the media begin to swarm and pressure builds for Mike McCabe and Maggie Savage to bring the killer quickly to justice. But the key to solving Aimée's death just might have been buried with her beautiful ancestor.

The latest McCabe and Savage thriller from USA Today bestselling author James Hayman is a crackling, twisty novel of suspense, perfect for fans of J.A. Jance and John Sandford.

Cove Member Nicole Reviews THE GIRL IN THE GLASS!

Crime thrillers tend to have a certain formula to them that you can rely on. The Girl In The Glass was a fresh departure from that and kept me on my toes throughout the book.

James Hayman is a new-to-me author and I enjoyed his method of storytelling. This book starts quickly with the death of a young female artist back in 1904. We flash forward to current time and learn of her descendent having identical physical features and talents as the original artist who died so many years before and who succumbs to death in an eerily similar way. But who is responsible for this latest death and why are the details so vague about the death back in 1904? Are the murders related to each other? I had to know.

The police on the case are partners who have been together for years and who have an interesting history. They clearly have feelings for each other but the right time just hasn't presented itself to act in those feelings. Yet...

The book was smartly written and there were just enough twists and turns to keep me interested while also having interesting characters throughout the book. The detective and sergeant were the stars of the book and I'm interested in reading the other books in the series to read about their history and see if their relationship develops - if it does.

Great book that I would recommend to others who enjoy crime thrillers. McCabe & Savage - I'll be back!


James Hayman, formerly creative director at one of New York’s largest advertising agencies, is the author of the acclaimed McCabe and Savage series: The Cutting, The Chill of Night, Darkness First, and The Girl in the Glass.