We're so excited to share our review of CHRISTA'S LUCK by Jennifer Grais & Michael Grais for TLC Book Tours! 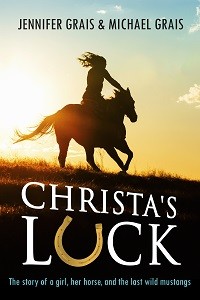 Inspired by a real horse rescue, Christa’s Luck is a teen fiction novel about Christa’s love for an endangered herd of wild horses and how her special connection with them inspires her to look beyond her own unforgivable mistakes and try again. She rises up to become a horse advocate at fourteen, whose passion and heart move an entire town to take action.

"In Michael and Jennifer Grais’ YA novel, a 13-year-old’s fate intertwines with that of the legendary Lost Herd of wild mustangs that roam the canyons of Nevada.

Christa Cassidy knows that she’s lucky. She lives with her parents and older sister on a small ranch in a beautiful part of the world; she has a grandmother who loves her; and she’s expecting a baby sister before the end of the summer. She even has her own horse named Lucky. But like any other teenager, she’s suspended between childhood and adulthood, unsure of her place in the world, at odds with her family, and uncomfortable with the way she looks, talks, acts, and feels. She’s really only at home when she’s sitting on a horse—particularly when she’s trying to track the Lost Herd through the canyons around her home. But when something horrible happens to Lucky, Christa’s world is upended, and things only get worse when it becomes clear that the Bureau of Land Management intends to round up the mustangs. With the help of a strong, troubled horse named Jenner, Christa is determined to figure out what’s going on. She soon finds that she must rein in her own passions as well as her horses, and that she won’t accomplish anything without friends and help.

In the vein of The Horse Whisperer and the Black Stallion, Christa’s Luck is an epic adventure story of courage, friendship and freedom.

"Michael Grais, the co-screenwriter of the 1982 film Poltergeist, and his wife, Jennifer, develop the plot handily, with a slow build toward a final, cinematic crisis in which Christa and her friends enact a daring rescue. ...[T]his is a satisfying YA novel—with a bold, visionary, and active young heroine, to boot. Highly recommended for young fans of horse-related fiction." --Kirkus Reviews

"I just finished reading Christa's Luck.  All I can say is I haven't finished a book since Harry Potter that I wanted the author to hurry up with the second.  I don't even know what Jennifer and Michael have planned but I sure hope their pens are moving right now. Well, for now I will just reread their great book."  --Susan Pommer, Gold Medalist  Grand Prix Dressage winner

"I instructed everyone to stay away as I read Christa's Luck. I was so emotional and drawn into the story. The book just keeps rolling and rolling and rolling and building on itself like waves. I totally loved it. I had a spring in my step for days thinking about it and I still miss that family. I can see it on the big screen too."  --Jean Dillon, Plymouth, MN

"I was biting my fingers during the climax!" --Janet Hogue, Portland OR

It is said that every girl loves horses, rainbows and unicorns; that's very true even for this former tom-boy! I worked with horses years ago and still love them today~I always hoped to be a cowgirl when I grew up. I loved reading books as a child and read all the horse books I could find—Black Beauty, the Chincoteague books—any horse book I could find.  I also studied them in high school and have always loved them.

Christa's Luck is no exception!  From the first chapter I was drawn into Christa's world—she loved horses and had a passion for the wild mustangs roaming in her small area in Nevada. The Lost Herd was legendary, some said a myth, but Christa and her family found them and kept track of them, as a government agency was trying to capture the mustangs and remove them from Nevada for profit, from a company trying to gain access to the land the mustangs roamed.

This book captures about 6 months of Christa's life. She is a thirteen year old girl who grows up a lot in this time. She is an accomplished rider at this sweet age and goes through so many heartaches during the book. She grows so much though her troubles and eventually she becomes a heroine to her family and to the town she calls home. I cried tears for her heartaches and accomplishments in this book. I would recommend this book for any young adult who loves to read, loving horses is a plus!

The authors brought this story to life after hearing of a similar story and they worked the story beautifully into this book. I would definitely read more from them.

Jennifer Grais is a singer-songwriter who recorded several albums in Los Angeles and Nashville and toured as Jackson Browne’s background singer.  When she met Michael and they moved to the rural area of Topanga Canyon, CA, her childhood passion for horses was rekindled. She completed a year-long program of study with Linda Kohanov, best-selling author of “The Tao of Equus”, and “Riding Between the Worlds,” and began exploring a deeper relationship with horses.

In December 2006, she was captivated by footage of a horse rescue that took place during a flood in the Netherlands at the hands of women riders. The drama of the rescue inspired the novel, “Christa’s Luck,” a young adult novel co-authored by Michael Grais. Research for the novel exposed Jennifer to the unfolding drama of the wild mustangs in the western United States and became the primary plot of the book. Read more about Jennifer and the inspirations behind Christa’s Luck.

Michael Grais has written and produced movies of domestic and international acclaim including Death Hunt, Poltergeist, Poltergeist II, Marked for Death and Cool World and more. Michael has also contributed to the book Why We Write and has taught filmmaking at University of New Mexico and in various workshops abroad. After attending New York University’s Film School and Emerson College, he earned his MFA in Creative Writing from the University of Oregon. Read more about Michael Grais.

Michael and Jennifer currently live in Northern California with their horse, Solo and two cats Francesca and Finnegan.

For more information about the wild horse issue in America, please read Return to Freedom and Love Wild Horses.

Posted by The Reading Cove at 9:20 AM