★ Blog Tour ★ ALL THE WAY TO HEAVEN by Becky Doughty — Guest Post + Giveaway!

We're so excited to welcome author Becky Doughty to our blog—she's sharing her dream cast for her brand new novel, ALL THE WAY TO HEAVEN!
Check it out below—and don't miss her awesome "Mystery Box" giveaway below! 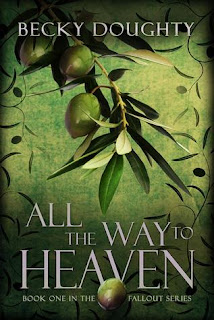 Synopsis:
Anica Tomlin, business major, has just learned that the man she’s been planning her future around, her Global Finance professor, already has a beautiful wife and family. Ani cashes in her graduation gift to herself a little early—a trip to Tuscany—but from the moment she boards the wrong train in Pisa, her plans for solitude and self-indulgence begin to unravel around her.

When a bicycle accident thrusts Ani into the skilled hands of the dashing Dr. Cosimo Lazzaro, she reluctantly accepts his invitation to recover in his family’s country villa, perched on a hilltop surrounded by the Lazzaro olive groves. But it’s been a black year for olive growers all over Italy, and generations of tradition are being put to the test like never before.

Ani is swept up in the drama of life in Tuscany, the convergence of old and new, and the passions that drive people to pursue the desires of their hearts. Just as Ani begins to get her feet under her again, an unexpected turn of events leaves her doubting the very existence of happily-ever-after, unless she can learn to trust the desires of her own heart.

Although All the Way to Heaven is a stand-alone novel, it is the first book in The Fallout Series, a collection of sweet contemporary romances that follow characters featured in the first book.

Casting ALL THE WAY TO HEAVEN!

This was fun! I have Pinterest boards for all my books, but I tend to just look for images that match my ideas rather than look for specific actors and actresses who might be able to play the part of each of my main characters. Let me tell you, though, it’s tough to find Italian actors, so most of these aren’t, and that’s really a bit of a disservice on my part, in my opinion. So here are some of my thoughts.

Ani (said like “Annie” – named after her Swedish grandmother, Anika) Tomlin: For some reason, Ani feels the most elusive to me. I know what I want her to look and act like in my head, but I’m having a hard time casting her. That said, I think Nora Arnezeder might be a strong possibility. She’s got that “girl next door” vibe even though she’s a bit of a wild child on and off screen. But give Nora a little darker hair and a bit of self-deprecation and I think she’s got the part!

Paulo Durante: I wanted someone who could pull off manly and dreamy and frumpy and brooding and approachable all at the same time. Someone like Alexander Koch, if you can get it out of your mind that he’s not so nice on Under the Dome. I mean, that hint smile? He’s one of those actors folks are saying we should keep an eye on. Well, what better way to keep an eye on him than to cast him in my book movie? And if the image I sent doesn’t convince you, check out this Buzzfeed. You’ll get it. 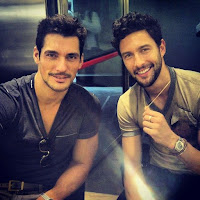 Cosimo Lazzaro: When I first started writing this story, I kind of fashioned Cosi after a young(er) David Gandy, the iconic Dolce & Gabanna model. But since he’s a model and not exactly an actor, I thought I’d better come up with an alternative. Ironically, I found another Dolce & Gabbana model who also happens to actually be an actor, too, and he fits the bill almost as well as David…Noah. I know, I know – neither of these guys are Italian, but they could certainly pull it off!  (And no, this was not just me taking advantage of an opportunity to share not just one, but two beautiful people with you…)

Madalina Poptelecon: When I wrote this, I kind of had this image in my mind of opera star Anna Netrebko, but she’s too old to play this part now. However, have you seen 2 Broke Girls? Kat Dennings in that show just kills me. I could totally see her pulling off the combination of snark and vulnerability Madalina puts off. And something else I love about Kat? She embraces her REAL LIFE curves in the same way Madalina does. I don’t know whether she sings or not, but who cares? If she wants the part, she’s got it. We’ll just overdub the singing parts with Anna’s voice, yes?

Isabella Adimari: I picture someone like petite and fine-boned, elegant and poised, but without being aloof. Although I haven’t seen her act, I think Nazanin Boniadi certainly has the look and could be a perfect fit for Isa.

Gerardo Adimari: Gerardo is not your stereo-typical leading man but he’s the perfect counterpart to his wife, Isa. I think Halit Ergenç would be a good fit for him?


Claudia and Franco Batista: So I pictured Franco Nero and Vanessa Redgrave when I wrote these two characters in, mainly because I loved their “art imitating real life” story in Letters to Juliet. But the Batistas in All the Way to Heaven are about 20 years younger than Vanessa and Franco are!

So to cast them today, I’d probably put Mandy Patinkin (Saul Berenson on Homeland) and Sela Ward (Sharon Shrieber, reporter in Gone Girl) in these roles, both actors who are in their 60s instead of in their 80s.

Tish Ransome (Ani’s best friend back home): When I wrote Tish into All the Way to Heaven, I kind of based her off a combination of Hayley Williams from the band Paramore and Ashley Greene. But when I wrote Tish’s story, Book 2 in The Fallout Series, A Light in the Dark (releasing Dec 23), I had just discovered the show Skins, and I fell in love with Effy – Kaya Scodelario. She became the image of Tish to me, and although Tish is much more like Hayley Williams in personality (Tish is also front man of her own band, The Marauders), Kaya has the fountain-of-youth-waif-pixie-changeling-tougher-than-you-think-rebel look about her that I really wanted for Tish.
Thanks for having me today – this was fun!Becky 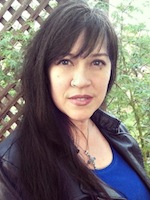 Becky Doughty is the author of the best-selling Elderberry Croft series, The Gustafson Girls series, Waters Fall, and more. She’s also the voice behind BraveHeart Audiobooks. She writes Women’s Fiction with strong elements of romance, as well as Young Adult and New Adult Fiction.

Becky’s favorite people are edge-dwellers, those who live on that fine line where hope and despair meet, where love is the only answer and grace becomes truly amazing. Becky is married to her champion of more than 25 years. They have three children, two of whom are grown and starting families of their own, and they all live within a few miles of each other in Southern California. They share their lives with too many animals, a large vegetable garden, and a strange underground concrete room they’re certain was built for dark and sinister purposes…