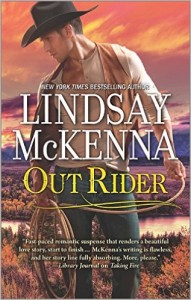 With her return to Jackson Hole, Wyoming, New York Times bestselling author Lindsay McKenna shows how love can find a way out of the darkness…

A fresh start—that's all Devorah McGuire wants. As a former Marine and current Ranger with the US Forest Service, she's grown accustomed to keeping others safe. But when the unthinkable happens, she can only hope that a transfer to Jackson Hole, Wyoming, will allow her to put the past behind her for good.

Dev's mentor at Grand Tetons National Park is fellow canine handler and horseman Sloan Rankin. He shows Dev the spectacular trails, never knowing the terror that stalks her every move. Despite her lingering fear, Dev feels an attraction for Sloan as wild as their surroundings.

With Sloan, Dev can envision a new life—a real home. Unless a vengeful man fresh out of prison succeeds in finishing what he started…

"Bringing two military veterans together, this compassionate love story explores the path to healing. Set in the Wyoming wilderness, the Forest Service is the perfect refuge for these wounded souls. Danger still follows the heroine, but she has found a partner who will add his strength to her considerable perseverance." —RT Book Reviews on Out Rider

OUT RIDER by Lindsay McKenna!

On her way to her new job as a Ranger at Grand Tetons National Park, Devorah McGuire gets a flat tire.

It is then that she meets Sloan Rankin, who stops to assist her on the road. Coincidentally, Sloan is also a Ranger and a farrier, and will happen to be her mentor at the Tetons while she becomes familiar with the area.

As they get to know each other, a relationship that started merely as a physical attraction actually develops into a nice friendship. However, although they both like each other, they are wary for different reasons. Sloan comes from a bad marriage that ended in a bitter divorce, making him distrustful of women. On the other hand, Dev has just gotten away from a terrifying experience with a stalker at her previous job, which ended not only in a physical assault, but in her actual moving to the Grand Tetons.

Things get complicated when Devorah starts sensing she is being observed although she has no proof of it.

As they investigate, they find out that her stalker has missed his appointment with his probation officer and is on the loose. Will Sloan’s willingness to protect her be enough to keep her safe? How will they prevent the stalker from getting his revenge after losing his job and going to jail because of her reporting the assault?

The plot of the book has great potential, but the romance itself does not develop as naturally as the reader would expect. In my opinion, the relationship between Dev and Sloan is developed merely on clichés that somewhat disrupt the credibility of it.

There are many instances in which the characters’ thoughts tend to be unbelievable, not what a normal person would be thinking. Just to mention one example, right after their first encounter, Sloan is already thinking he would like Dev to be the mother of his children. This is completely contradictory since he had been portrayed as a distrustful man, and to be honest, not even trustful men in their right minds would have these thoughts after such a first casual encounter with a stranger.

It is nice that the author wants to fulfill every reader’s dream of love at first sight; but in her eagerness to accomplish this, her characters lost realism.

Having said that, still, if you are a fan of Western Romances, and you are willing to compromise a little on the authenticity of the characters’ development, and the natural flow of a growing relationship, you will enjoy this novel.

The setting described is magnificent, with the Grand Tetons as the breathtaking background to a suspenseful and romantic story. After all, who wouldn’t enjoy living a love story surrounded by some of the most beautiful displays of natural wonders in America?

A U.S. Navy veteran, Lindsay McKenna was a meteorologist while serving her country. She pioneered the military romance in 1993 with Captive of Fate, Silhouette Special edition. Her heart and focus is on honoring and showing our military men and women.

Creator of the Wyoming Series and Shadow Warriors series for HQN, she writes emotionally and romantically intense suspense stories.