★ Blog Tour ★ ORCHARD AT THE EDGE OF TOWN by Sherlee McCoy — Excerpt + Giveaway!

A Print Copy of ORCHARD AT THE EDGE OF TOWN! 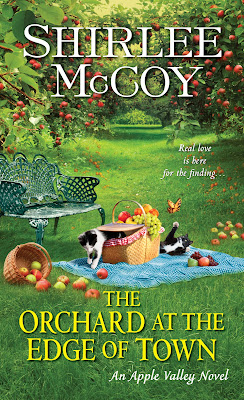 Apricot Sunshine Devereux-Miller needs to stay lost. Her eccentric aunt's home in Apple Valley is the perfect place to forget her cheating ex-fiancé and get her no-longer-perfect life back under control. Plus, it couldn't hurt to fix up the house and turn its neglected orchard into a thriving business. And if Apricot can keep Deputy Sheriff Simon Baylor's two lively young daughters out of mischief, maybe she can ignore that he’s downright irresistible—and everything she never dreamed she'd find ...

Simon isn't looking to have his heart broken again. He already has his hands full raising his girls. And lately he's thinking way too much about Apricot's take-charge energy and unwitting knack for stirring up trouble. He can't see a single way they could ever be right for each other. Unless they can take a crazy chance on trusting their hearts—and risking the courage to finally find their way home.

Exclusive Excerpt of ORCHARD AT THE EDGE OF TOWN!

“About?” She turned to face him, her gaze direct.

If she were hiding anything, she wasn’t showing it.

“Rose Devereux didn’t mention anything about a woman named Anna coming for a visit.”

She sighed. “She wouldn’t. Anna isn’t my given name. It’s my professional name. If I can find my wallet, I’ve got some business cards.”

She started digging through the purse, but the thing was so small, he thought she’d have found the wallet by now if it were there. He took it from her hand, set it on the counter. “I think we both know this little tiny bag doesn’t have a wallet in it. So, how about you just explain what kind of work you do that you need a professional name?”

She blinked, a smile slowly curving the edges of her mouth. A real smile this time, it made her eyes sparkle and showed off a dimple in her right cheek. “Good grief! You don’t think I’m a . . .” She snorted and shook her head. “I own a nursery in LA. I got tired of explaining my given name to every Tom, Dick, and Harry who met me, so I decided to go by Anna.”

“And your given name is?”

He did not laugh, but God! He wanted to.

“Were hippies, are hippies, will always be hippies. I lived in a commune for the first sixteen years of my life.” She smiled again. “And having to give that explanation thousands of times is exactly why I go by Anna. Now, if I could just find my wallet, I could prove my identity, and you could be on your way, Officer . . . ?”

“Deputy Simon Baylor.” He offered his hand, and she gave it a firm, quick shake. No nonsense. That was the impression she was giving off.

Her big pink dress was giving off another impression altogether. It was saying froufrou and fluffy, a little flighty and scattered.

“Right. Deputy Baylor. I do have an ID and I do have business cards. They’re probably in my truck. I’d volunteer to go get them, but I’m sure you have better things to do with your time than wait for me to do that.”

He did have things to do. Daisy worked at the library, and if he knew one thing about his sister-in-law, it was that she liked to be the first in every morning.

When he worked graveyard, she spent the night with the twins so he wouldn’t have to hire a babysitter, but she was always dressed and ready for work when he arrived home. He tried to be respectful of her time, leave work as soon as the shift was over, get home well before she actually needed to be at work, but right then, he really was curious about Apricot Sunshine Devereux-Miller, and he wasn’t in all that much of a hurry to leave. “I’ve got time.”

“Perfect,” she responded. “I’ll just hop back on my bike—”

“The Schwinn that’s sitting on the porch?” The one that looks like it should be ridden by Dorothy or by the Wicked Witch of the West?

“That would be the one,” she responded. “Unless you want to offer me a ride. In which case, I could avoid the humiliation of pedaling a 1940s Schwinn in this 1980s monstrosity of a dress.”

“I’ll drive you to your truck.” The girls wouldn’t be awake for another twenty minutes, and Daisy didn’t have to be at the library until eight thirty. He could give Apricot a ride, check her ID, make sure everything she said was kosher. Give himself a little more to smile about, because he was smiling. The pink dress, the tumbling-over hair, the image of Apricot pedaling along the dirt road was probably the most amusement he’d had in a good long while.

Shirlee McCoy spent her childhood making up stories and acting them out with her sister. It wasn’t long before she discovered Nancy Drew, The Hardy Boys, her mother’s gothic romances . . . and became an ardent fan of romantic suspense. She still enjoys losing herself in a good book. And she still loves making up stories. Shirlee and her husband live in Washington and have five children.