★ Book Review ★ TWO TRUTHS AND A LIE by Ashley Stoyanoff! 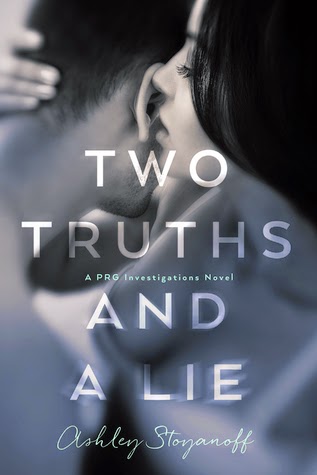 One year ago, I became a missing person. I left everything behind—family, friends, school. It seemed like a good idea at the time. My only option, really, until I realized running from a police officer isn’t as easy as I thought it would be.

It’s been exactly three-hundred and sixty-five days since I left home, but I’m finally ready to take the step I should have taken a year ago. I’m done hiding. I’m done running. I’m going to take my life back.

It was supposed to be easy. A meeting with Jason Pierce, a private investigator, was set up for me. All I had to do was go to him, let him do his thing, and then I could go home, or so I thought.

That is, until I met Jason and things got…complicated.

A well written romantic suspense manages to have it all and more....

1) A sexy, strong, alpha male lead who gets to be the hero.
2) A storyline that has mystery, intrigue and danger.
3) complex characters with troubled pasts
4) A great supporting cast
5) A good woman who needs saving
6) Sexual tension that you can cut with a knife

When you find a good one, there really is nothing better for me.

Two Truths and a Lie by Ashley Stoyanoff has all of this. Elena is on the run from her "fiancé" cop boyfriend.  In hiding, She has been missing for a year now and ready to stop running. She wants her life in New York back and her family back, but she needs help. A helpful friend she met along the way has lead her to Jason, a man with a team, who can help anyone in a jam. Their first meeting doesn't go so well, but soon Jason and his team prove their worth and are dead set on getting Elena her life back.

At first I felt the relationship between Elena and Jason moved way too fast in the beginning, for a woman who is on the run from a bad relationship. However, Jason quickly grew on me and so did their connection. The story held my attention and kept me wanting to read on.

I really enjoyed this book, and want to read more of this series....Immediately.